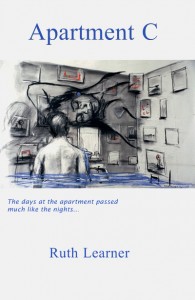 Carl Halstead, a celebrated union lawyer, turns fixer for New Labor. Estranged from his wife and associates, he withholds vital information on GM foods, causing a scandal and sabotaging his political career. He flees London for his childhood holiday apartment in Barcelona, a legacy in his mother’s will.

Apartment C is alive with childhood ghosts – his overbearing mother, her lover, Dolores the au pair. Escaping the oppressive atmosphere, Carl begins an affair with a young drifter, Angela. Their cat and mouse games expose Carl to a new recklessness…

‘I found [Apartment C] a haunting memorable read, subtle, complex and powerful in its evocation of a man in the midst of personal crisis… Ruth Learner uses dislocation to allow us to see the world more acutely, and her tightly controlled, measured language and finely evoked observations are a pleasure.’

‘… the writing was very assured and created a powerful sense of place and atmosphere…. The jumps in the narrative between London and Barcelona, past and present are deftly handled … I found the opening chapters extremely assured and evocative. The two plots – the mysterious political scandal (slightly reminiscent of the David Kelly affair) from which Carl is trying to escape, and the subplot about his complicated relationship with his dead mother – are managed extremely effectively and create real dramatic tension.’

Careers in the Media, A career guide for students of media, Victoria Press, 1994.

A Writing Condition: Loss and the creative endeavour, presented at the Australasian Association of Writing Programs (AAWP), 19th Annual Conference, 30 November 2014 and published in the online proceedings in February 2015.